Alas, Digg Reader is shutting down at the end of March
14mar

After the death — no, let’s not mince words — murder of Google Reader, I tried out a dozen or so other RSS readers to see if I could get a similar experience. Of all the ones I tested, I was very surprised to find that Digg Reader was the best of them all, for my purposes anyway.

It was simple, clean, compact, kept up to date, had no weird fluff, no “recommendations” or “trending articles” unless you accidentally visited Digg itself by accident, and since I started using it it has never had any downtime that I’ve noticed.

I’ve come to rely on it as much as I did Google Reader in the past few years, so I am sad to see that the service is shutting down in two weeks. You’ll still be able to export your feeds for a while afterwards, though. 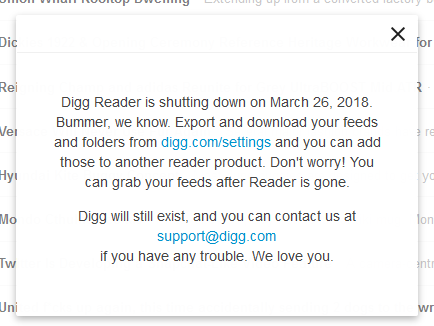 Digg itself will live on, but the Reader portion is being retired. I understand why — RSS readers aren’t exactly glitzy or profitable, they’re more a public service than anything. At some point a company has to reckon with that and decide whether they want to continue subsidizing a tool used by relics like me instead of whatever most people use, probably Twitter or something.

Well, Digg Reader, you were a great tool and I’m sad to leave you. Guess it’s time for me to test out another dozen RSS readers, or maybe bite the bullet and host my own.