The HTC U’s existence has been confirmed, and while we’ll have to wait until May 16 to see HTC’s new flagship in its full, official form, the phone’s biggest new feature has already been heavily leaked and teased.

We’re talking, of course, about the pressure-sensitive frame, which is set to give you a brand new way to interact with your phone.

But how exactly will it work? And how much will it actually be able to do? Using the information available to us, we aim to answer those questions.

What is Edge Sense?

Edge Sense, or Sense Touch as it’s been called in some leaks, is a feature which enables you to squeeze the sides of the HTC U to interact with it.

Essentially then, Edge Sense is likely to be a bit like having a customizable button – albeit one which you’ll want to show off to people – and based on leaked set-up screen images it seems you’ll be able to toggle it to do two different things – one with a long press, and another with a short one. 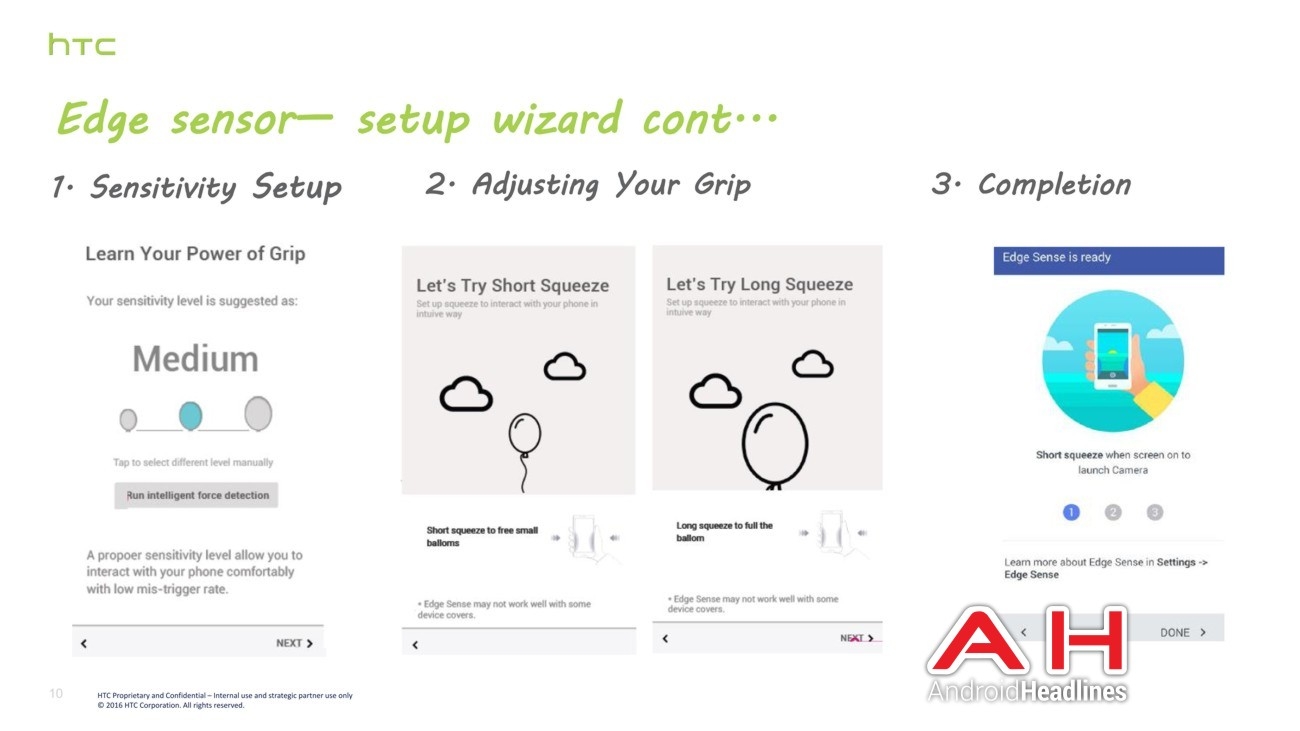 In fact, it might do even more, as although the leaked setup screen images only show short and long presses, other leaks suggest you might be able to swipe the edge too, and that it might be context-sensitive.

Some leaks even suggest that Edge Sense will exist in place of certain physical buttons – so there might not be volume buttons on the side of your phone for example, with you instead just swiping the edge to change the volume, though we’re skeptical that HTC would ditch such key buttons for an unproven feature.

And whether or not buttons are still present it’s likely that only part of the frame will be pressure-sensitive, as most leaks so far only show people interacting with the top third on either side.

The leaked setup screen lets you choose between three different sensitivity levels, presumably to prevent it accidentally firing when the phone’s in a tight pocket or just being held.

It also notes that Edge Sense may not work properly in some protective cases, which makes sense, but could limit its usefulness.

What can Edge Sense do?

We don’t have a definitive answer to this yet, but we do have a good idea of some of the things it may be able to do.

Based on HTC’s official teaser for the HTC U, which has the tagline "squeeze for the brilliant", we’re confident that you’ll be able to squeeze the sides, so the long and short presses mentioned above will likely feature.

At a minimum, these will probably allow you to launch apps and features of the HTC U. The leaked set-up screen explains that a short squeeze when the screen is on would launch the camera for example – though it’s not clear whether the screen needs to be on for all interactions, or whether different things will happen when the screen is off.

It’s likely that Edge Sense will be customizable to some extent, so you’ll probably be able to choose which apps and features launch when you squeeze the sides, though exactly how customizable is again unknown. It might be that HTC gives you a selection of functions to choose from, or it might be that you can tailor Edge Sense to do almost anything you want.

Either way, we wouldn’t be surprised if you can go beyond just launching apps, and also get quick access to favorite contacts and other things that could reasonably be handled with a single squeeze.

It's also very possible that Edge Sense will go beyond on/off interactions and let you alter the volume, scroll down web pages and interact with apps, by letting you swipe as well as squeeze and by offering context-sensitive interactions.

Examples of these are shown in the video above, which was leaked a while ago and originally believed to be a concept phone. While that concept now seems to be a reality, its final form may well be different – not to mention less ambitious – so we’d take it with a grain of salt.

The video specifically highlights quick access to music and Google Assistant, with a contextual UI and the vague ability to “launch anything”, “access anything” and “do everything”.

Another concept video shows an interface that’s reminiscent of the Edge screen found on phones such as the Samsung Galaxy S8, with a list of apps that pop up at the edge of the display, but rather than swiping in from the edge of the screen to access these, here you squeeze the phone, then slide your finger up or down the frame to scroll through the apps, and seemingly tap the frame to launch one.

It also appears that you can bring up that menu on either side of the screen, by pressing/squeezing one side or the other, and it’s likely that you’d get a different selection of apps and features on each side.

How much of this will have made it past the concept stage and into the HTC U is unclear. At worst, if all you can do is set it to launch a specific app, we’ll likely be left with a kind of cool but ultimately slightly gimmicky customizable button.

But if you can swipe as well as squeeze and access context-sensitive actions, or even just an extra menu like Samsung’s Edge screen, it could be a genuinely useful feature, and exactly the thing HTC needs to stand out from the crowd.