Like a computer build would just be a pile of parts without a good case, Computex 2017 wouldn’t be complete without some stand out PC chassis designs. Luckily, multiple manufacturers delivered the goods with plenty of concepts, newly finalized designs and a few surprise callbacks to legendary computer chassis from the past.

So come with us as we run down the list of the best PC cases we saw at the giant computer show.

At first glance, the Phanteks Shift and Shift X might look an awful lot like the Corsair One, but you really can do so much more with its vertical cases. Unlike Corsair's fully built desktop, users can customize the internals of the Shift however they choose.

There is also much more room for full-sized ATX power supplies, full-length graphics cards and copious amounts of liquid cooling – especially if you go for the larger Shift X.

Everything packs up into a case whose footprint is practically no larger than a graphics card. Given the reserved and modern styling of the case, we can easily see Phantek’s Shift-series slipping right into living room home entertainment setups.

Back in the day – by which we mean the aughts – you couldn’t find a PC case bigger than the Cooler Master Cosmos II. Now as part of the company’s 25th anniversary we’re getting an updated version of the legendary chassis for 2017 complete with curved tempered glass sides, blue LED lighting and a much lighter aluminum frame. 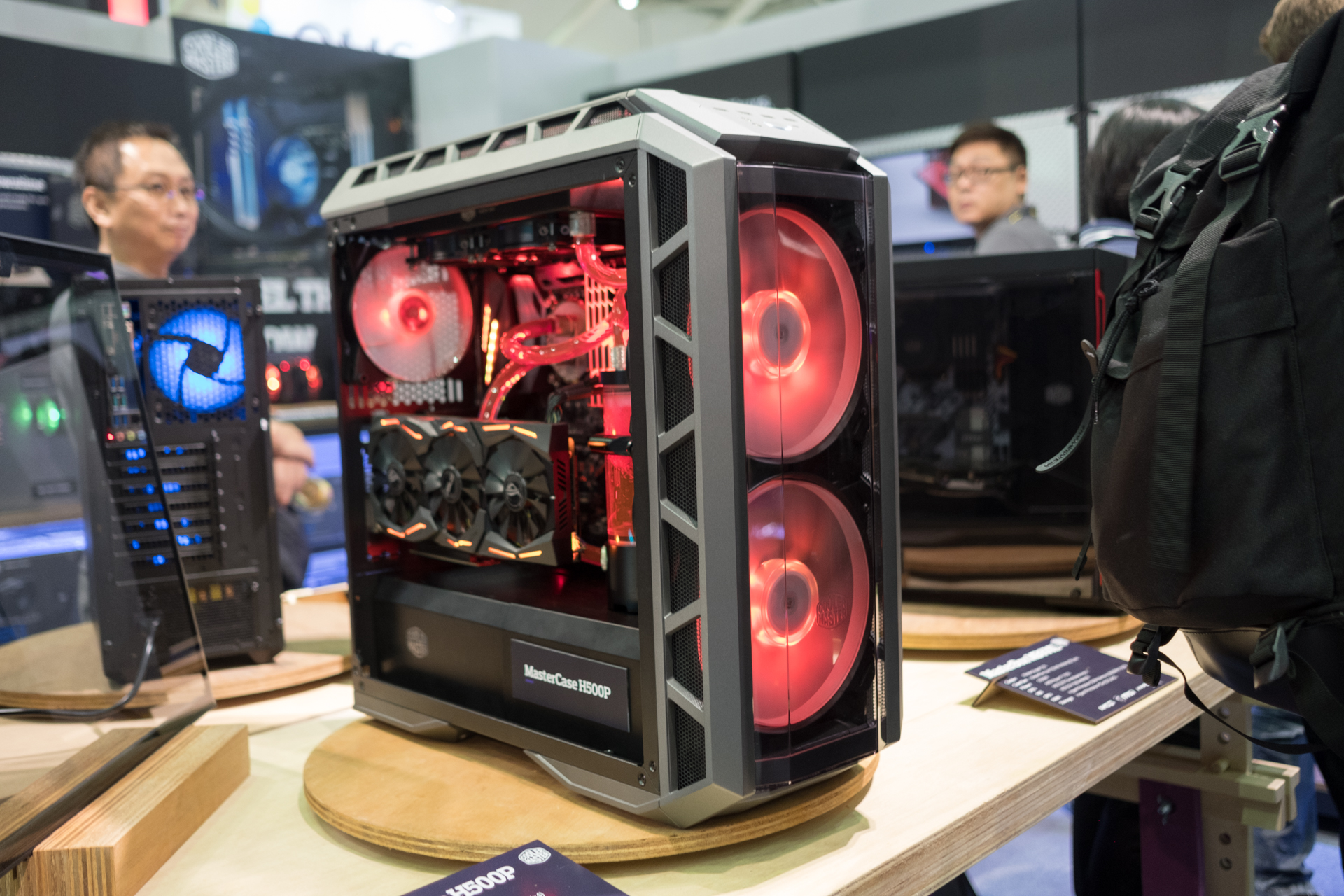 Likewise, Cooler Master brought back its 'high-airflow' design, otherwise known as the HAF-series, back in the form of the H500P. The new case inherits the HAF-series use of 200mm fans, but in a very modern and industrial design. We also dug the way Cooler Master integrated a large panel to cover up all the cable clutter and an additional shield to hide the motherboard cut out. 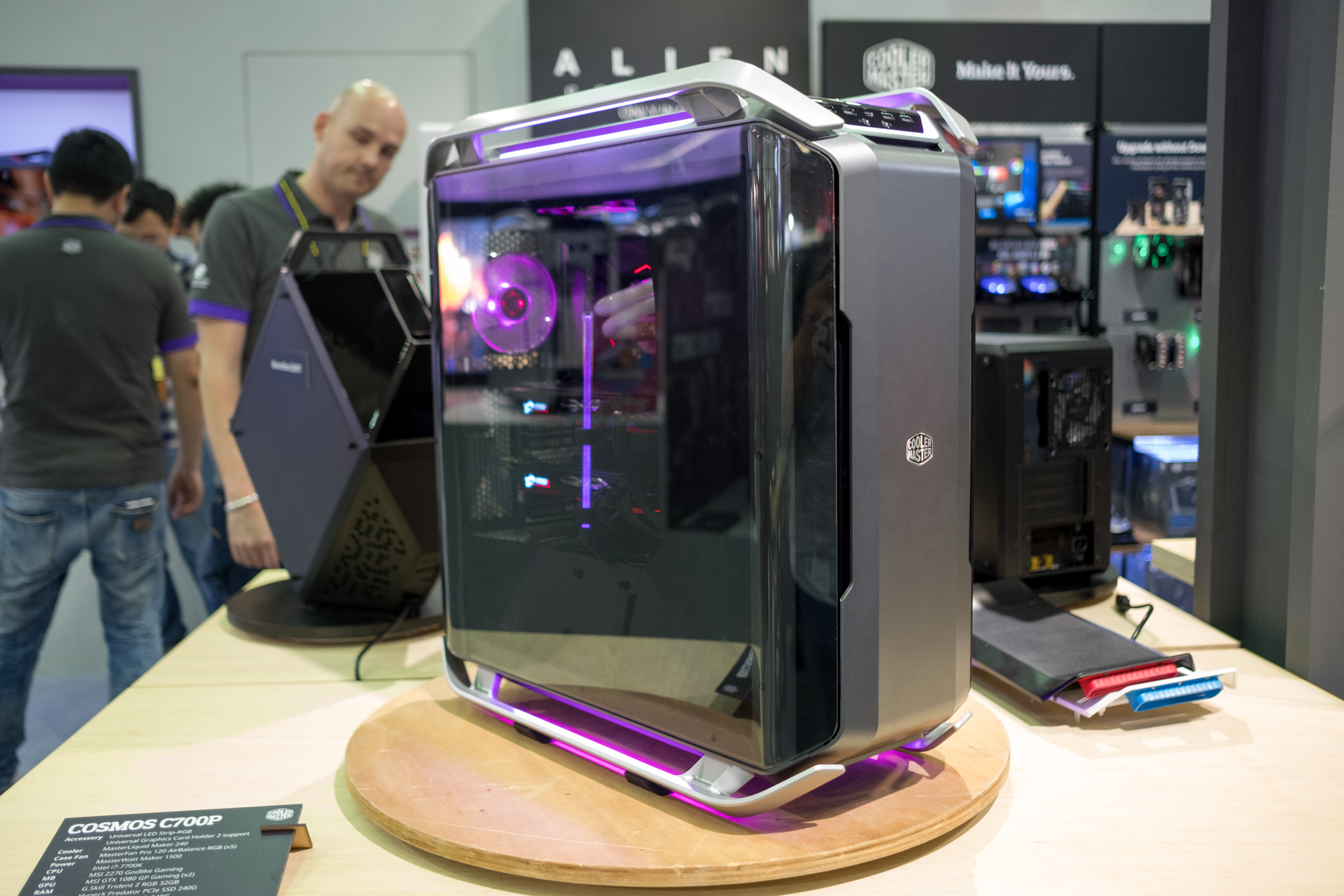 Beyond paying homage to its roots, Cooler Master showed off an early concept version the Cosmos C700P, which will be the true succeed to the Cosmos II. The case further modernizes the Cosmos series with an angular look, modular motherboard and RGB LED lighting.

Cooler Master wasn’t the only one to bring out the big guns, the Corsair Slate concept is a system big enough have dual radiators sitting side by side. What’s more, there’s plenty of space to house two separate water-cooled systems in the same chassis. Oh, and there’s a ton of curved tempered glass on all sides of the case. 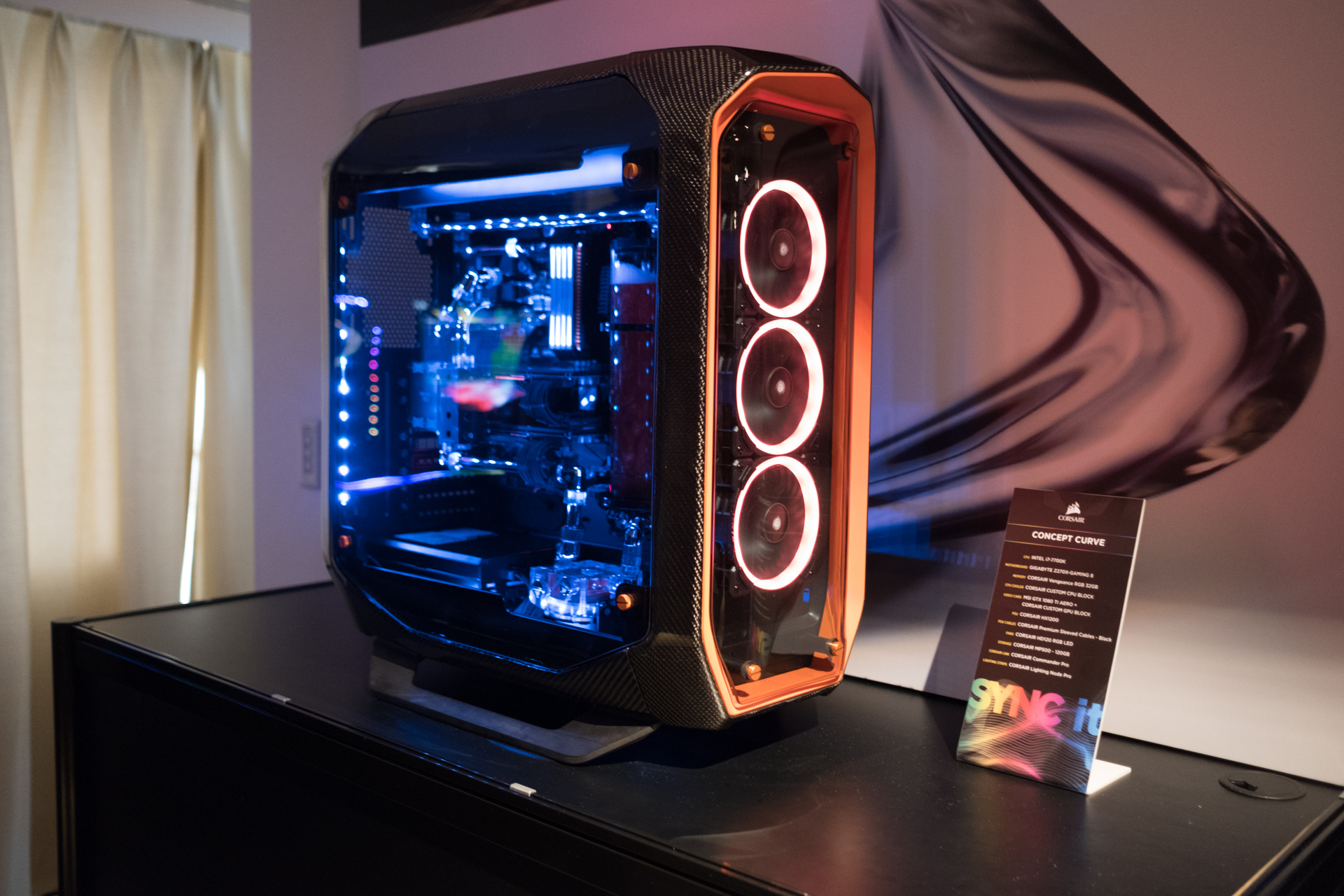 Corsair’s second concept, the Curve, is a little less ostentaticious but no less gorgeous. Based on the, Graphite 780T, the Curve could be the next iteration of the graphite series bringing curved tempered glass to the sides and updated internals. Unfortunately, we probably won’t see the carbon fiber body coming to the final design.

The BeQuiet! Dark Base 900 White Edition might not be a completely new case, but it’s easily one of the most attractive and modular PC cases at Computex. Designed for complete customization, users can reorient the motherboard in four different orientations and shift its position any which way they like, add storage trays as they’re needed and even reposition the power supply if it strikes their fancy.

BeQuiet! says they only plan to produce 2,000 units as part of the limited run on the special white version, so you’ll have to be quick about snapping up this bright computer chassis.

PC cases for the most part are either made with aluminum or plastic these days, so to see InWin is changing things up with a touch of wood is a welcome change of pace. The InWin 806 mixes wood and tempered glass together for a classy look we would typically expect from high-end audio equipment. Looks aside, the InWin 806’s internal layout is looks to be feature packed and well-thought-out.

For Computex 2017, Sliverstone brought out its Redline RL-07 concept cases, which take a more angular design approach to the mid-tower chassis. The split face on the Redline RL-07 are certainly unique and helps show off more of the LED lighting.

Another interested design choice Silverstone went with this concept is to forego case feet and just have the chassis stand on its own bottom while air is pulled through a strip of perforations along the sides.

Although the EVGA DG-7 isn’t an entirely new case – since it was first introduced at CES 2017 – it’s in its final form at Computex. EVGA triples down on tempered glass with its mid-tower with one of the cleanest looking designs we’ve seen yet. Its other big features are a physical overclocking button and a riser bracket that allows users to mount their graphics card vertically to show off their GPU fans.