Moto Z2 Force is poised to be more than just an ambitious modular smartphone – it’s actually a successful one with the idea in its first year and the list of Moto Mods that’s growing.

The Moto GamePad is the latest add-on that transforms your phone into something new and exciting. How so? It has the potential to become the Nintendo Switch of Android gaming.

Sure, Motorola’s 2-in-1 concept here is different from Nintendo’s big-screen, small-screen idea. This GamePad makes any Moto Z a hybrid phone and dedicated game system with a screen.

It’s a different sort of 2-in-1, one that gives Moto Z2 Force with the GamePad a lot of potential to make playing the large library Android games more practical in all sorts of portable scenarios.

The Moto GamePad works in a snap

What’s great about Moto Mods, including the new Moto GamePad, is that the add-ons simply snap onto the back of the phone via magnets. Data is then transferred via smart connectors.

This is the reason Motorola’s modular smartphone system works more reliably versus Bluetooth game controllers for smartphones. There’s no annoying pairing process. Like the Switch, it just works when attached.

It's a pleasing sensation slotting it into the dock, with the instant change to a landscape gaming controller needing no pairing and feeling intuitive (although getting it out is a little harder…) 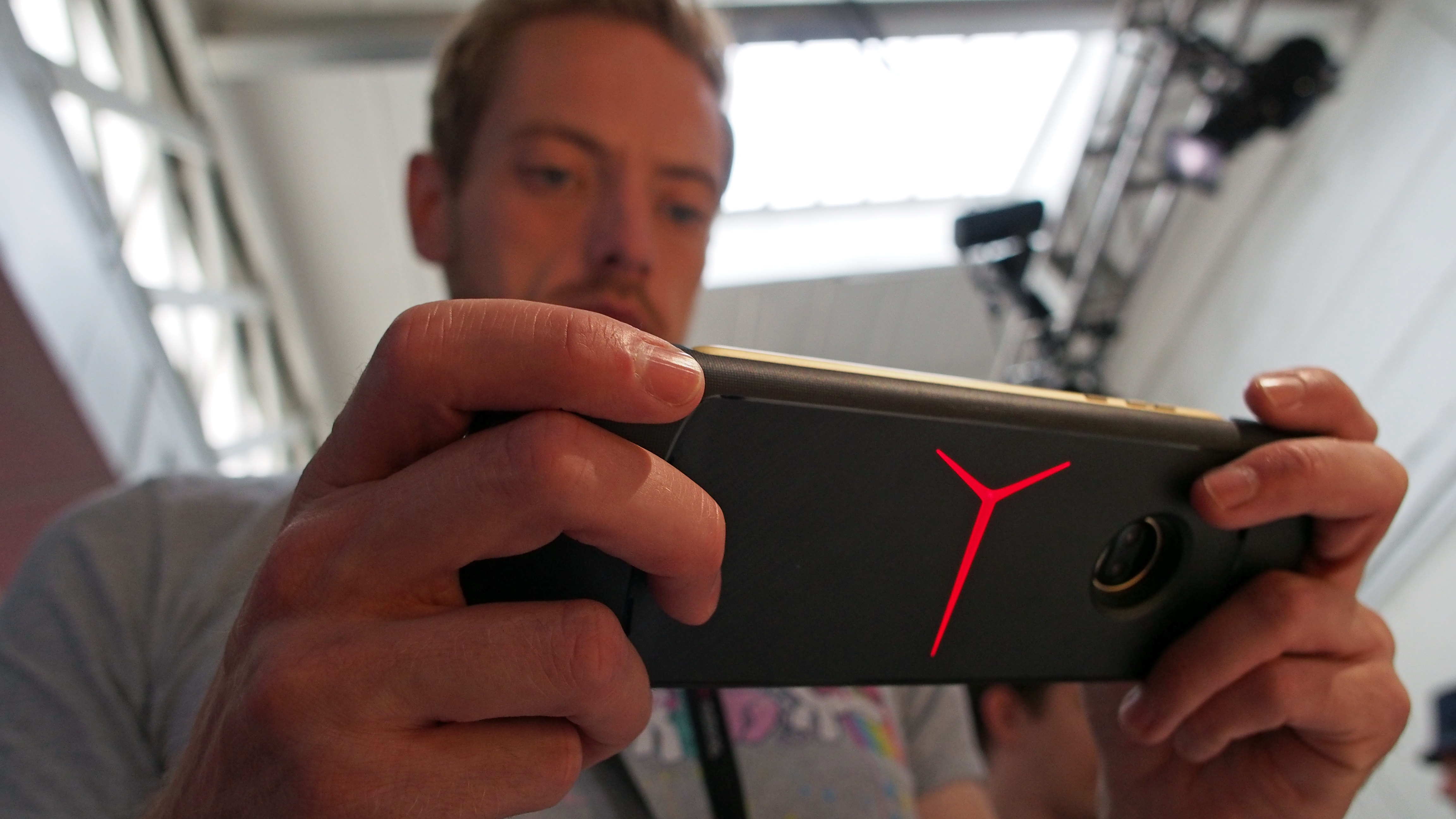 You can instantly swap in the GamePad, then swap it out for on-screen controls in confined situations. It works the same as attaching other Moto Mods, like the pico projector or JBL speaker.

Now that the Moto GamePad can be added to the more powerful new Moto Z2 Force, there’s an opportunity for this combination brings more serious mobile gaming to the Android platform.

It needs more than just similar looks to be the Nintendo Switch of Android.

Gaming at the center, controls on the side

The Moto GamePad mod follows the tried-and-true handheld formula of arranging a screen in landscape mode – in this case a 5.5-inch display – and flanking it with dedicated buttons.

Motorola didn’t stray from what we need from a portable gaming device: dedicated buttons and sticks that are always better than on-screen controllers if the situation permits.

The Moto GamePad includes a familiar set of analog sticks and buttons, so you’re likely to be familiar with the layout. Importantly, it allows developers to easily port over games. Win-win. 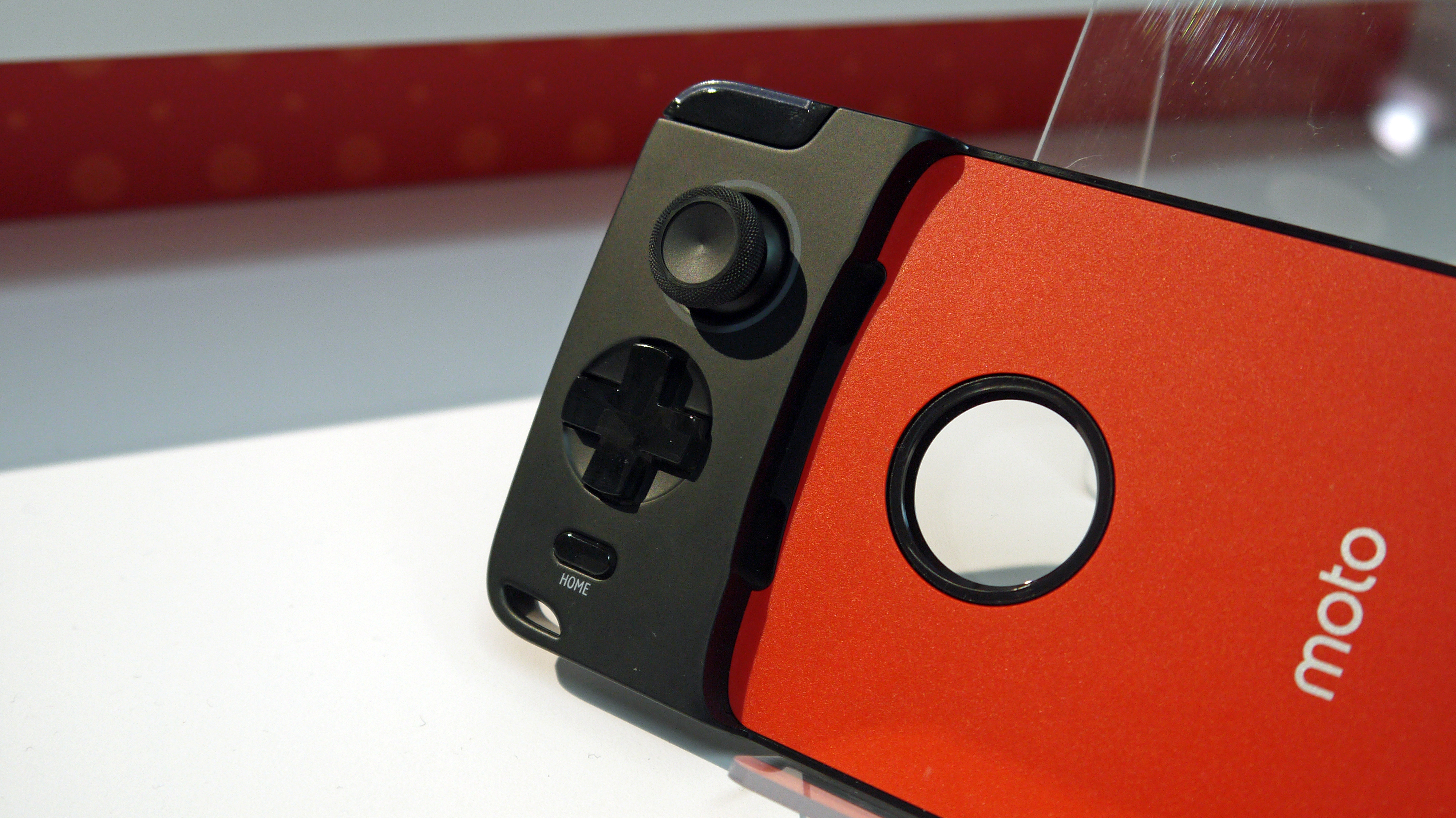 In the hand, it's a little bit cumbersome though. There's something about the way it's put together – especially the shoulder buttons – that doesn't sit right and makes it feel a bit too cramped.

There are a lot of buttons and sticks on here, and while you'll probably get used to them over time with the right game, it's not an instant feeling of perfection that you got with the Nintendo 64 controller, for instance.

One of the things we like about the Nintendo Switch is that it’s practical. We want to bring it with us everywhere. It’s a big-screen-capable console and a totable portable system all-in-one.

The Moto GamePad gives the Moto Z2 Force this level of versatility, too. It can be a flagship phone one minute and a fully capable handheld gaming system with solid specs the next. 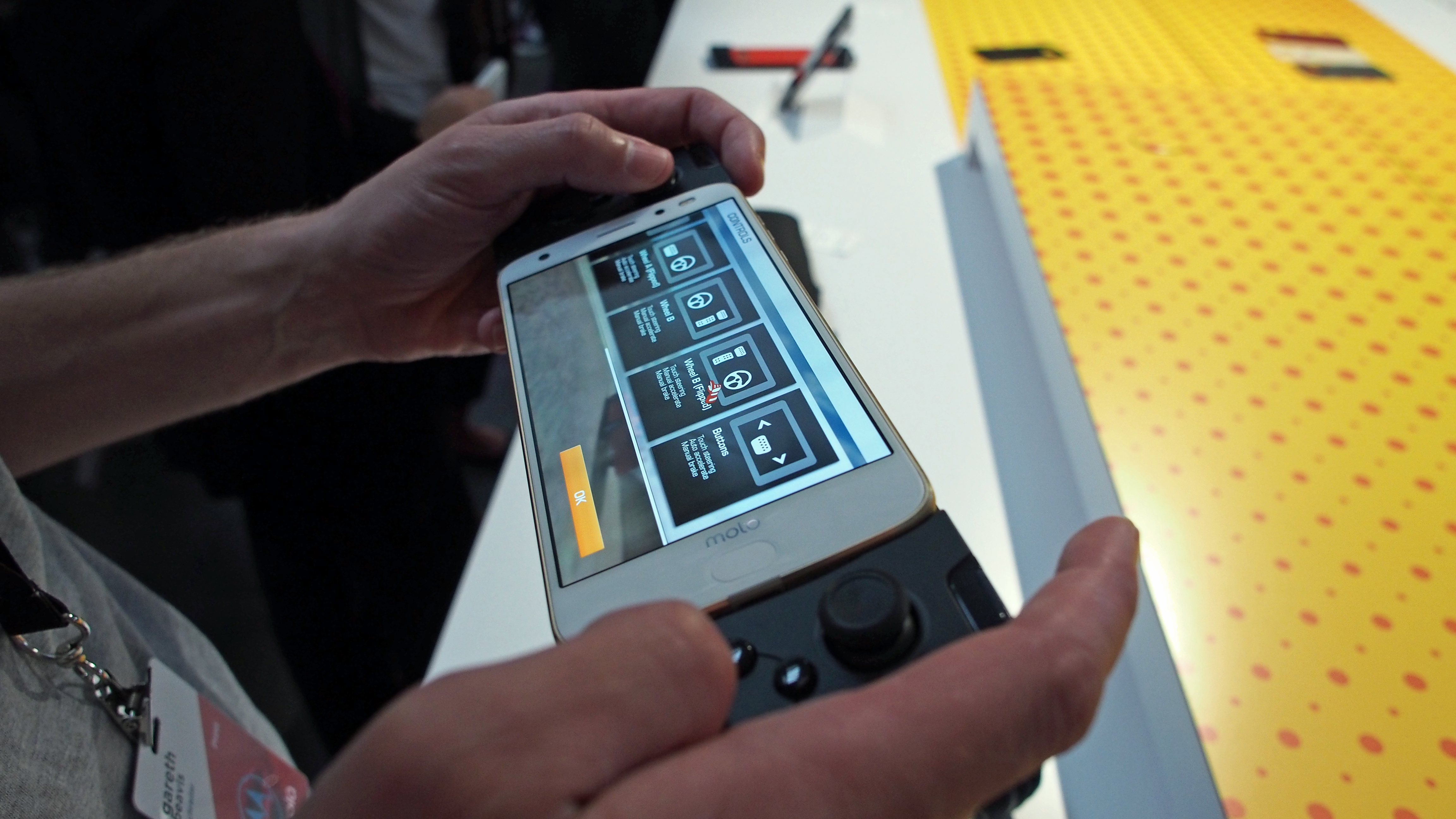 How capable is it? Well, the  Z2 Force is running the very best chipset from Qualcomm, and it really works well. There are no games on the Google Play Store that this phone can't handle, and with the QHD screen it's actually higher-res than the console from Nintendo… the visuals really look great.

The gap between the latest and greatest Nintendo console’s hardware and your phone’s is shrinking with each new System on a Chip release. That’s good news if you’d like to see your next phone double as a powerful Nintendo Switch-like device.

Of course… what matters most is the games

Motorola has a lot work to do if it ever wants to become the Nintendo Switch of Android phones. It’s capable of running high-end games via the Google Play Store, but there’s also a lot of junk. It’s hard to find something equivalent to a Nintendo triple-A title.

So while Moto Z2 Force’s Snapdragon 835 chipset with an Andreno 540 GPU inside might give the Nintendo Switch’s Tegra X1 a good fight, the addition of the Moto GamePad to the Moto Z2 Force doesn’t turn it into a Legend of Zelda: Breath of the Wild machine. 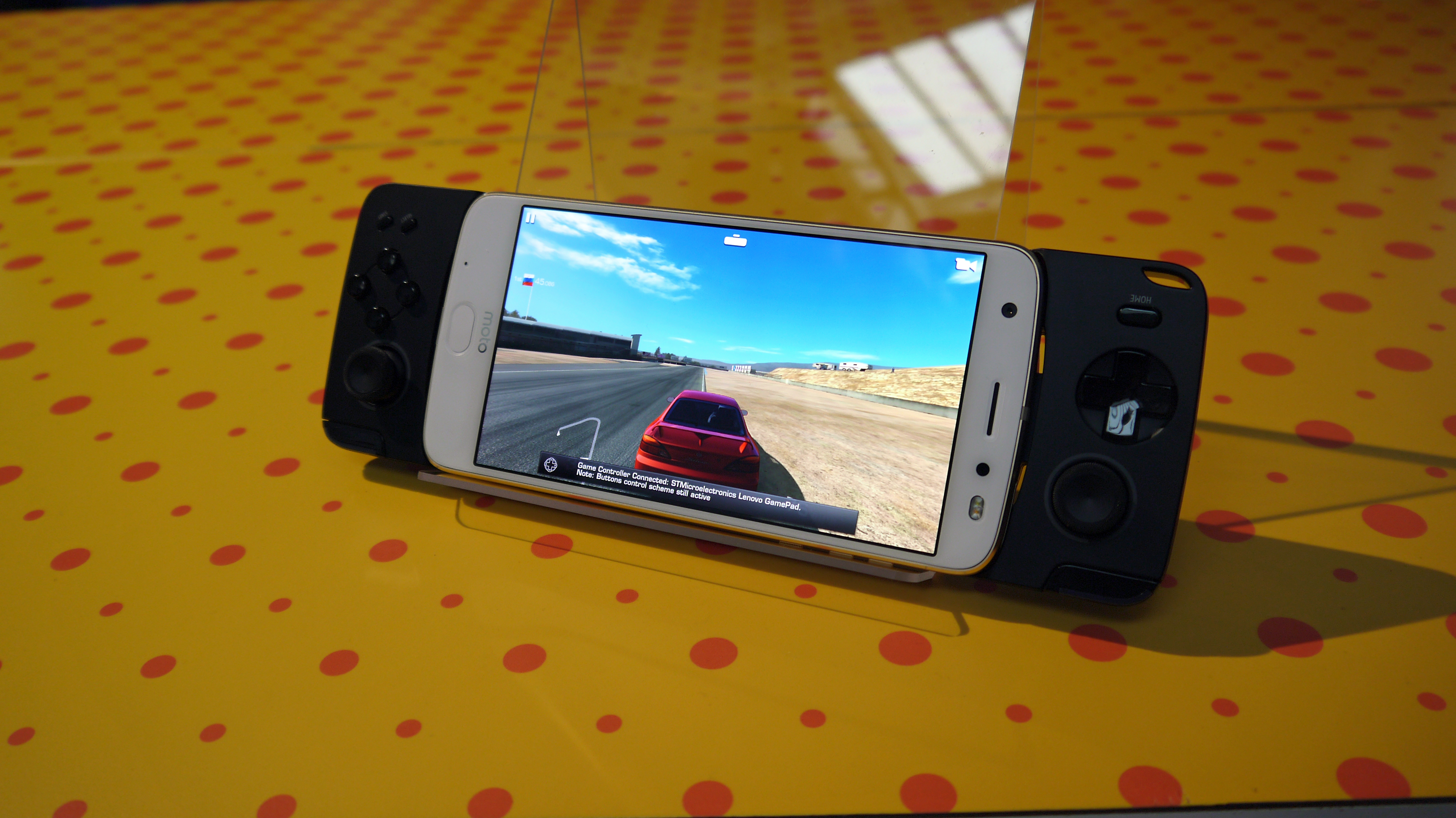 Here's the biggest issue we had with the Motorola Moto Mod GamePad. It's just not good enough to work with current games. We spent quite some time playing the demos on the handset, and none of them worked that well.

Real Racing 3, used in the presentation of the Mod, wasn't able to map the buttons to the actual gameplay, so the idea that you can use the second analogue stick to function as an accelerator or brake wasn't possible, it seems.

We played a fighting RPG game that looked gorgeous on the screen, but again, didn't make use of all the buttons – it's a shame as this one looks like it was supposed to be a good demo for the Game Pad. 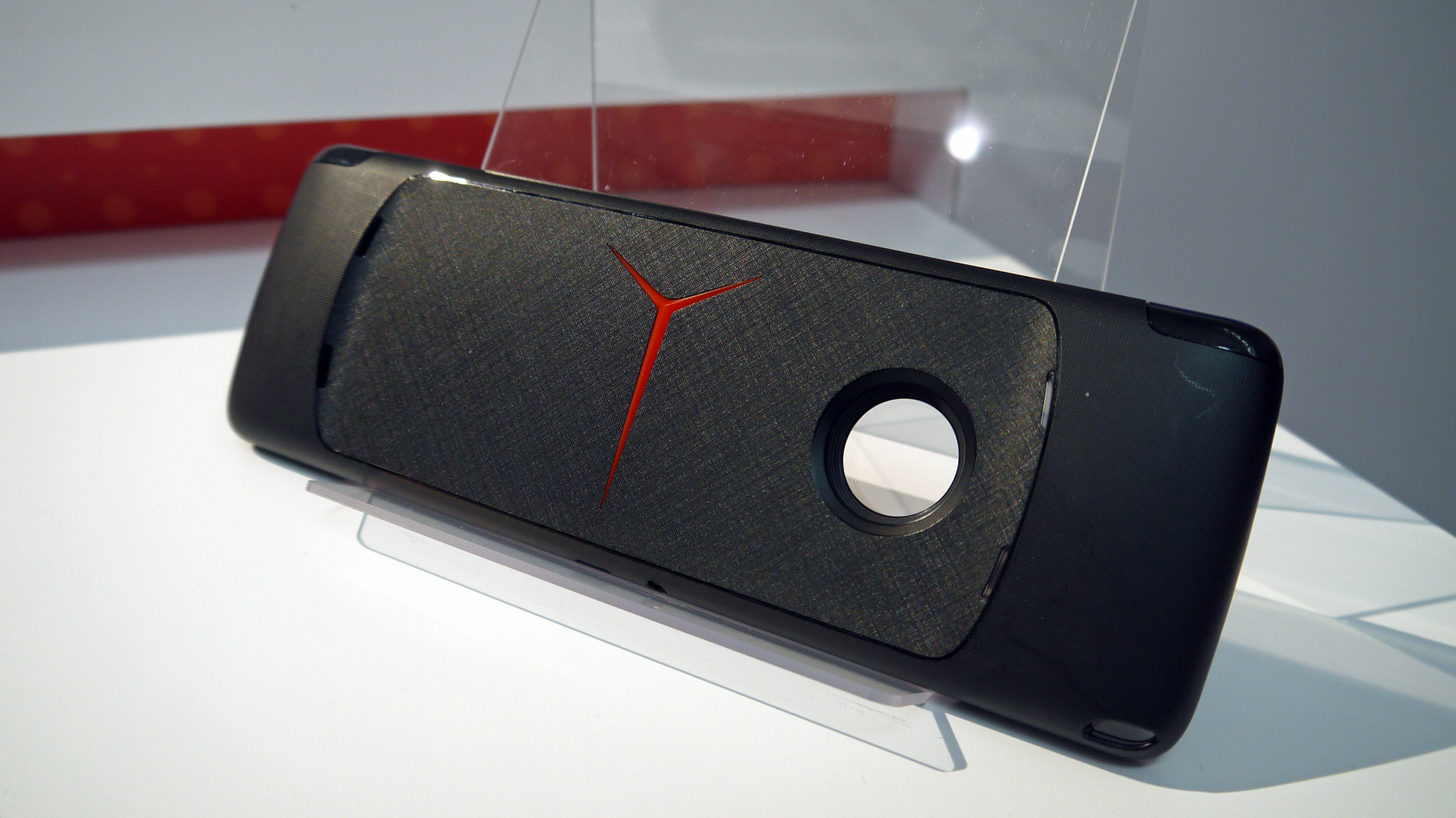 And then – inexplicably – there were two stick man games on the device that just couldn't use the Game Pad at all – making it odd to even have them on there.

These are small problems that Motorola and the Android game developers can solve in order to take Android games to the next level – but unless the Moto Mods and the Game Pad become the de facto way of gaming on the go, this isn't going to entice developers in.

It's a shame, because the lack of latency after each press and the stunning visuals the phone can produce – as well as the extra battery life – are all you need to have an excellent gaming experience.

Motorola should have worked with a big name studio to get some AAA games on here from launch – and it may still do that. But given there's nobody going to be spending a large amount on a game for an Android phone, there's not a lot there to motivate developers to code for another controller.

That said, just like the future of VR is mobile, the next evolution of mobile gaming may involve a dedicated gamepad. Let’s just say it’s a much needed ‘switch’ for the Android gaming ecosystem and one we hope Motorola can put more work into, as this is a brilliant game pad.